We use cookies to enhance your browsing experience as outlined in our Cookie Policy.
We’d like to use technologies, such as cookies, to make your experience with us as enjoyable as possible. We may share information about the way you use our sites and applications with our trusted media, advertising and analytics partners so we can deliver relevant and personalized advertising. By clicking ‘I accept’, you consent to our use of such technologies.

SAS flies to Lithuania from/via Oslo, Copenhagen or Stockholm (depending on route).

We fly from all our destinations in Europe, the US (Boston, Chicago, Los Angeles, Miami, New York, San Francisco and Washington D.C.) and Asia (Tokyo, Shanghai, Beijing and Singapore).

SAS flies to Palanga and Vilnius in Lithuania.

Fly with SAS to Palanga and Vilnius

Fly Scandinavian Airlines to Palanga for a relaxing holiday by the Baltic sea. Take a walk along the beaches and sand dunes and let the salty air relax you.

Or take a weekend in Vilnius; explore the UNESCO-listed old town with its cobblestone, narrow streets. Cross the bridge of the Vilnia river and see the mermaid in Užupis – a self-proclaimed republic in Vilnius.

The Curonian Spit in Lithuania

The Curonian Spit is a 98 km long, thin, curved sand-dune spit that separates the Curonian Lagoon from the Baltic Sea. It stretches from the Sambian Peninsula, Kalingrad, to the port city of Klaipėda on the mainland of Lithuania.

The width of the spit varies from 400 meters to 3.8 kilometers, and the view is spectacular walking along it and its sand dunes. 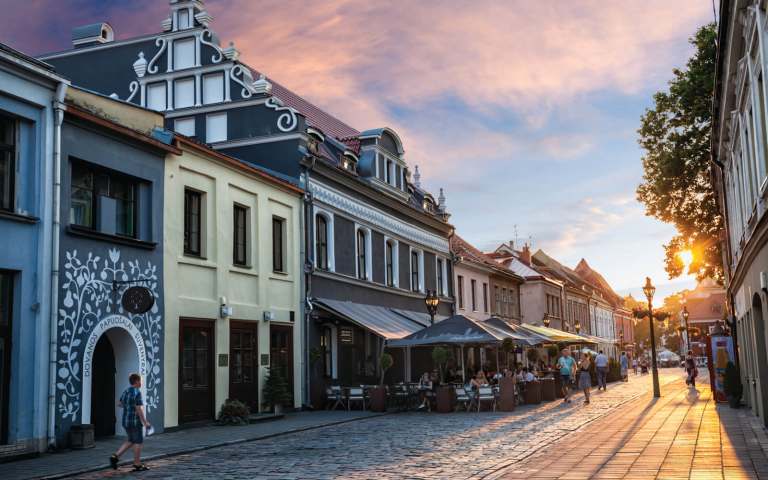 At SAS, we strive to ensure our customers have a relaxed and comfortable journey. Regardless of which ticket type you carry, you’ll always enjoy certain SAS customer benefits.

Always included in your flight is easy online check-in, coffee and tea onboard, up to 90% price reduction for children and use of the SAS App.

EuroBonus gives you more of the world. It is the most popular loyalty program for travelers in Scandinavia. As a member of EuroBonus you will earn points on your flights with us and our partner airlines in Star Alliance. You can use the points to pay for your next trip, upgrade or rent a car, among other things.

We CO2 offset all tickets booked using a EuroBonus number. This means that we now carbon offset just over 40% of all the emission that our planes emit. Read more about our sustainability work

If you are not a member already, it’s free and easy to join. Create a EuroBonus account and earn points on your trip.